Mapping floodwater extent for active floods is critical for local and regional officials and for disaster relief organizations that need to ascertain where to focus their efforts. NASA's Land, Atmosphere Near real-time Capability for EOS (LANCE) provides data to the Dartmouth Flood Observatory.

Users can visualize imagery related to floods in Worldview, or download data using the links below.

MODIS and VIIRS Corrected Reflectance imagery are available only as near real-time imagery. The imagery can be visualized in Worldview and Global Imagery Browse Services (GIBS). More:

Integrated Multi-satellitE Retrievals for GPM (IMERG) is another NRT precipitation product that users may find useful. it is not listed in the table below as it is not a LANCE product (and does not meet the LANCE latency requirement) but it is visible in Worldview.

The MODIS snow cover layer shows the presence of snow cover over land and water bodies as an index related to the presence of snow. It is based on a Normalized Difference Snow Cover Index (NDSI) that is derived from the cloud free snow reflectance sensed by the MODIS instrument, and hence this layer shows presence of snow during day time and under cloud clear condition only. NDSI snow cover though could be retrieved in the valid range of (0, 1.0) at every pixel, additional tests like surface temperature screening linked with the surface height is used for accurate detection. Snow is precipitation that forms from water vapor in the atmosphere where temperatures are below 0° Celsius. If the ground temperature is also below freezing, snow will accumulate on the ground as bright, white layer of snowpack. Snow cover reflects sunlight back into the atmosphere, helping to cool the Earth’s surface. Snowmelt is used for drinking water, water for crop irrigation, and can moisturize soil to reduce the risk of wildfire in many areas in the world. When snow melts in the spring, too much snow can cause springtime flooding.

The AMSR2 Snow Water Equivalent layer indicates the amount of water that is contained in snowpack in the Northern and Southern Hemispheres measured in millimeters (mm). Another way to think of it is if all the snow were melted instantaneously, it would be the depth of that water. The snow water equivalent layer is useful for assessing the amount of water that is present in the snowpack and can be used to assess surface runoff when the snow melts and to assess water availability for regions in lower elevations. The Advanced Microwave Scanning Radiometer 2 (AMSR2) instrument is a conically scanning passive microwave radiometer sensing microwave radiation at 12 channels and 6 frequencies ranging from 6.9 to 89 GHz aboard the Global Change Observation Mission – Water 1 (GCOM-W1) satellite.

LANCE imagery can be overlaid with the following data sets from NASA's Socioeconomic Data and Applications Center (SEDAC), which are also available as layers in Worldview: Flood Hazard Frequency and Distribution, Flood Hazard-Mortality Risk and Flood Hazard Economic Risk. 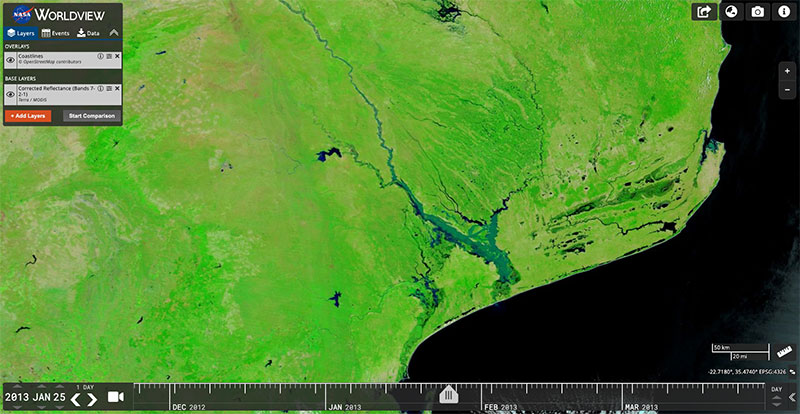 This image shows flooding in Mozambique. By January 2013, the Limpopo River had spilled over its banks with water spanning more than 10 kilometers in certain areas. Read more at NASA's Earth Observatory.