Near real-time satellite data are used to revise or confirm 24-hour forecasts related to weather systems approaching the land from the oceans, which in turn gives confidence for flood warnings. Satellite images are also useful in providing everyone with the same 'big picture' of severe storms.

Users can visualize imagery related to floods in Worldview, or download data using the links below

Register for an Earthdata Login to start downloading data.
Read the LANCE disclaimer for more information about using the data.

The Earth at Night shows the earth’s surface and atmosphere using a sensor designed to capture low-light emission sources, under varying illumination conditions. It is displayed as a grey-scale image. Sources of illumination include both natural and anthropogenic sources of light emissions. Lunar reflection can be used to highlight the location and features of clouds and other terrestrial features such as sea ice and snow cover when there is partial to full moon conditions. When there is no moonlight, natural and anthropogenic night time light emissions are highlighted such as city lights, lightning, auroras, fires, gas flares, and fishing fleets. This layer is useful for viewing storms as well as showing patterns of human activity and energy behaviors such as cities and highways, the holiday periods, the tracking of shipping and fishing fleets at night and, the burning of waste natural gas (gas flares) from on and off shore oil/gas production sites.

The Lightning Imaging Sensor (LIS) aboard the International Space Station (ISS) supplies near real-time lightning data over data-sparse regions, such as oceans, to support operational weather forecasting and warning. The LIS was placed on the International Space Station in Feb 2017 as part of the U.S. Department of Defense (DoD) Space Test Program (STP)-H5 science and technology development payload. By placing LIS on the space station, which has a highly inclined orbit, a greater geographic range of measurements are obtained than previously measured by Tropical Rainfall Measuring Mission (TRMM) LIS.

LANCE provides the AIRS Precipitation Estimate Day/Night layer which is an estimate of daily precipitation and the Advanced Microwave Scanning Radiometer 2 (AMSR2) surface rain over ocean. Precipitation is formed when water vapor condenses and becomes heavy enough to fall under the force of gravity. The characterization of precipitation over the ocean is important as, unlike on land, there are limited ground/surface stations that measure precipitation in the vast expanses of ocean. Integrated Multi-satellitE Retrievals for GPM (IMERG) is another NRT precipitation product that users may find useful. it is not listed in the table below as it is not a LANCE product (and does not meet the LANCE latency requirement) but it is visible in Worldview.

The MODIS snow cover layer shows the presence of snow cover over land and water bodies as an index related to the presence of snow. It is based on a Normalized Difference Snow Cover Index (NDSI) that is derived from the cloud free snow reflectance sensed by the MODIS instrument, and hence this layer shows presence of snow during day time and under cloud clear condition only. NDSI snow cover though could be retrieved in the valid range of (0, 1.0) at every pixel, additional tests like surface temperature screening linked with the surface height is used for accurate detection. Snow is precipitation that forms from water vapor in the atmosphere where temperatures are below 0° Celsius. If the ground temperature is also below freezing, snow will accumulate on the ground as bright, white layer of snowpack. Snow cover reflects sunlight back into the atmosphere, helping to cool the Earth’s surface. Snowmelt is used for drinking water, water for crop irrigation, and can moisturize soil to reduce the risk of wildfire in many areas in the world. When snow melts in the spring, too much snow can cause springtime flooding. 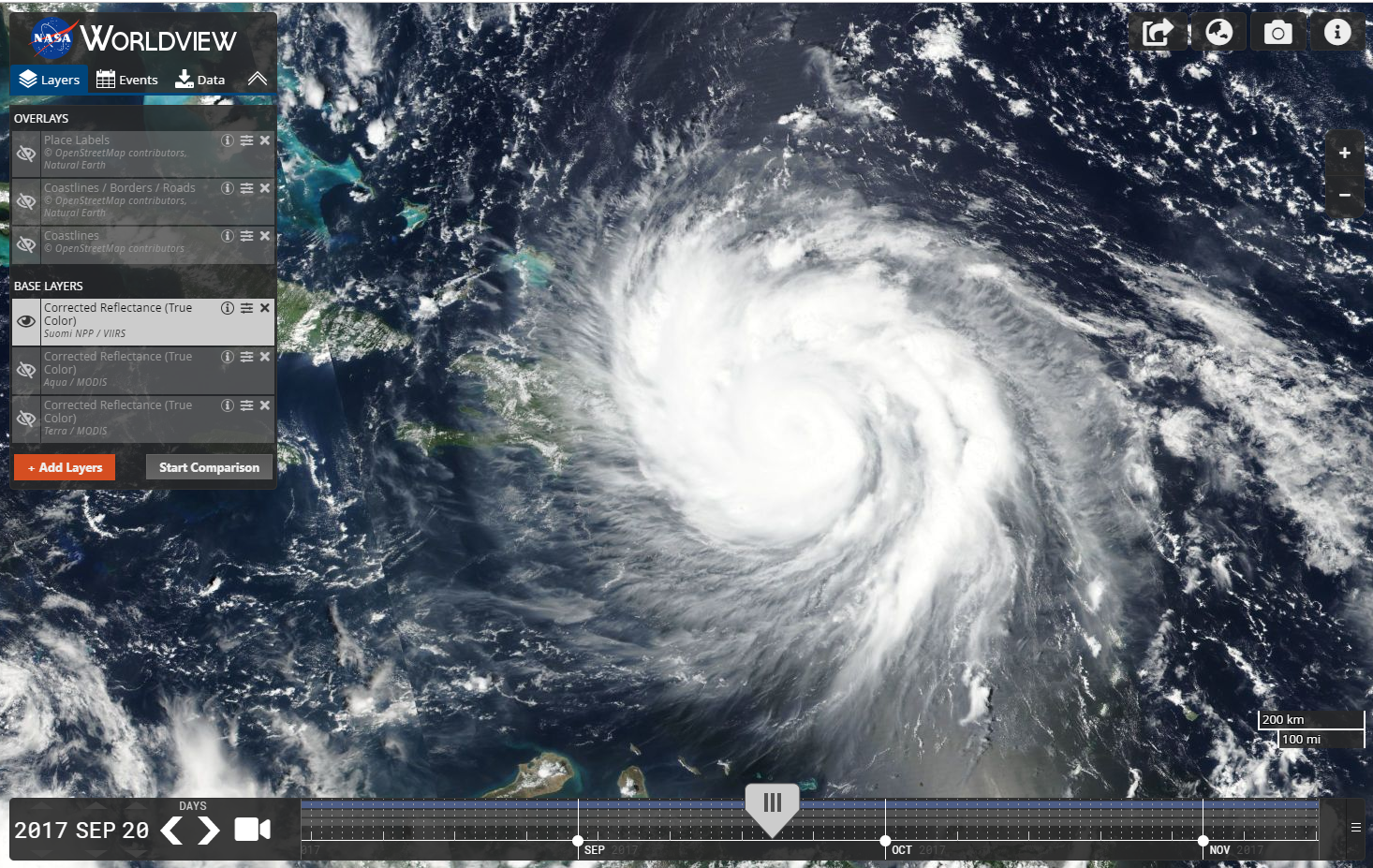 Hurricane Maria moved across the Caribbean in mid-September 2017, making landfall in southeastern Puerto Rico on 20 September 2017. Using the date slider at the bottom of the screen it is possible to track the storm using Worldview. Read more at NASA's Earth Observatory.

Read about how near real-time LANCE AIRS Data Contribute to the Successful Forecast of Hurricane Sandy.