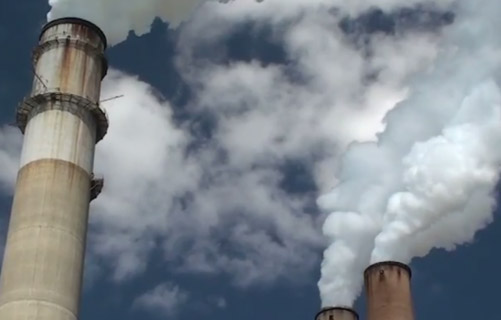 Every year, around 7 million deaths occur due to exposure from air pollution and 9 out of 10 people worldwide breathe polluted air, according to the World Health Organization. Scientists, health officials, and air quality managers around the globe are conducting research into this silent but deadly killer. With the information acquired from both ground-based and satellite- based data, decision makers are able to monitor and respond to events. These articles, many from the Sensing Our Planet series, highlight some of these efforts.

Aerosols
Aerosols are particulate matter, like dust, ash and smoke, from both natural or anthropogenic, or human-caused, sources. They are found in the atmosphere around the globe.

Effects of Emissions on Climate Change
Qualitative improvement of the IPCC scenarios.

Nature’s contribution
Researchers investigate how much wildfires contribute to pollution, and how far this pollution can travel.

Smoke over Athens
The effects of forest fires show up in a multi-satellite view of pollution.

The power of particles
Can smoke spark severe tornadoes?

Volatile trees
Forests fill the air with more than just a fresh scent.

Volcanoes and Climate Change
Large-scale volcanic activity may last only a few days, but the massive outpouring of gases and ash can influence climate patterns for years.

When the Dust Settles
Each year, several hundred million tons of African dust are transported westward over the Atlantic to the Caribbean, Central America, and South America.

Air Quality
Air quality is impacted by elements in the atmosphere, such as nitrogen dioxide, carbon monoxide, and tropospheric ozone. These elements can react with others, forming particulate matter and ozone, producing haze and even acid rain.

A black cloud over Cairo
The source of a yearly scourge is revealed.

Carbon control
Radiocarbon and satellite data hint at the future of California emissions.

Crisis in the Crescent
Drought turns the Fertile Crescent into a dust bowl.

Heart disease is in the air
The air you breathe could be harming your heart.

On the trail of global pollution drift
Scientists use NASA's Tropospheric Emission Spectrometer (TES) to study drifting pollution and its sources.

Out of Africa
Researchers revise the story behind Puerto Rico’s 2015 drought.

Probing the Arctic atmosphere
One of the least industrial areas of Earth is a crossroads for pollution.

Atmospheric Chemistry
There are many elements that make up our atmosphere, like nitrogen, oxygen, and carbon. How they react with other elements influence atmospheric chemistry.

A new pole hole
In winter 2011, an ozone hole appeared over the Arctic for the first time.

Carbon Conundrum
Research results highlight the role of new data sets in understanding global change, Schimel said, as well as the usefulness of computer models that connect the atmosphere and the biosphere.

In the Arctic darkness
Beneath a frozen surface, stirrings.

The UARS Cornucopia: A Legacy of Research
Nine years after its initial deployment, the Upper Atmosphere Research Satellite (UARS) is more than just an antiquated piece of metal floating around in space.

UARS: A Model Dataset
The UARS satellite has revolutionized our view of the mesosphere.

Meet some of the scientists using Earthdata using data for health and air quality research and applications.

Dr. Steven Massie uses remotely-sensed data to better understand how aerosols have a huge impact on on climate and human health and improve how aerosols are detected by Earth-observing satellites.

Jun Wang uses NASA Earth science data to study atmospheric composition and climate change; remote sensing of aerosols, clouds, and trace gasses and the effects of these on global weather and climate.

MOPITT data now available in LANCE
Global carbon monoxide data from the MOPITT instrument aboard NASA’s Terra satellite are the newest near real-time products available through the Land, Atmosphere Near real-time Capability for EOS (LANCE) system.

NASA’s ASDC to House SAGE III Atmospheric Data Products
NASA’s ASDC will be the home for more than a half-dozen new atmospheric data products from the upcoming SAGE III mission.

OMPS Near Real-Time Data
Near real-time ozone and sulfur dioxide data products from the OMPS instrument are now available through the Land, Atmosphere Near real-time Capability for EOS (LANCE) system.