Sensors aboard Earth observing satellites and NASA’s Fire Information for Resource Management System (FIRMS) provide information about wildfires 24/7 to anyone, anywhere in the world.

Wildfires are an inescapable part of living on a planet forged in fire. In the United States, an average of 69,020 wildfires (about 85% of which are human-caused, according to the National Park Service) burn an average of 6.63 million acres each year, based on data from the past 10-years compiled by the National Interagency Fire Center (NIFC). Along with the loss of life, the financial impact of these fires is immense. Insured losses from just the Mendocino Complex Fire and the Carr Fire, both of which broke out in July 2018 in California, were more than $845 million, and the fires damaged or destroyed 8,900 homes, 329 businesses, and 800 private autos, commercial vehicles, and other types of property, according to figures from the California Department of Insurance.

While these fires burn, though, they can’t hide. Even in the most remote corners of the globe, their heat signatures can be detected by sensors aboard Earth observing satellites. The ability to rapidly provide information about the approximate location and movement of individual wildfires using instruments aboard Earth observing satellites is a global success story that is helping save lives and property.

Providing information about hotspots detected by instruments aboard Earth observing satellites in near real-time is a capability that has been available for more than a decade through NASA’s Fire Information for Resource Management System (FIRMS).

FIRMS users also can sign up to receive email Fire Alerts notifying them of fires detected in specific areas of interest. Through this free service, alerts can be received in near real-time or as daily or weekly summaries. Every week approximately 15,000 FIRMS alerts (including daily alerts, Rapid Alerts, and weekly alerts) are sent to users in more than 160 countries, according to the FIRMS team. 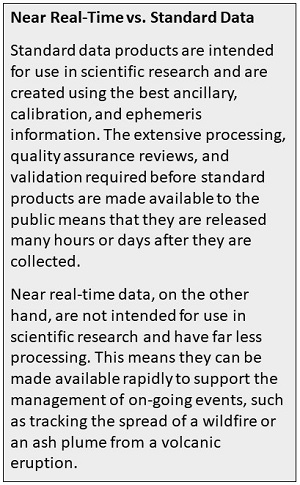 FIRMS was developed by the University of Maryland in 2007 with funds from NASA’s Applied Sciences Program and the United Nations Food and Agriculture Organization (UNFAO). NASA began offering FIRMS near real-time data in 2007, and the UNFAO began offering the data in 2010 through its Global Fire Information Management System (GFIMS).

According to the U.S. Forest Service, dry woody fuels ignite when reaching a temperature of about 540°F (assuming enough oxygen is present), and an established wildfire burns at temperatures that can exceed 1,500°F. This heat is a beacon to orbiting sensors like MODIS and VIIRS, which detect radiated energy.

MODIS orbits Earth aboard the Terra and Aqua satellites, while VIIRS is aboard the joint NASA/NOAA Suomi National Polar-orbiting Partnership (Suomi NPP) satellite. If a wildfire is burning and MODIS or VIIRS orbits overhead in their normal operating mode, the fire’s emitted energy generally will be detected.

The MODIS Fire and Thermal Anomalies Product (MCD14DL; doi: 10.5067/FIRMS/MODIS/MCD14DL.NRT.006) is the foundation of FIRMS products. When MODIS detects a thermal anomaly, which could indicate a wildfire or any significant source of heat, a computer algorithm identifies the center of the 1-km2 area in which the anomaly is detected. This location is plotted and available to fire crews and wildland managers (and anyone with access to the FIRMS Fire Map) within three hours of the observation and provides an approximate location of a potential wildfire or hotspot.

It’s important to note that the geolocation of a detected hotspot is based on predictive rather than definitive satellite orbit information (see the “Near Real-Time vs. Standard Data” sidebar, above). This means that there can be small differences—generally less than 100 meters (about 325 feet)—between an indicated hotspot and its actual location on the ground. In some instances, such as during spacecraft maneuvers or space weather events, the difference between an indicated hotspot and its actual location can increase by several kilometers.

The VIIRS I-band (375 m) Active Fire product (VNP14IMGTDL_NRT; doi: 10.5067/FIRMS/VIIRS/VNP14IMGT.NRT.001) was added to the FIRMS collection in 2016 and was developed using the MODIS Fire and Thermal Anomalies product. This means that the VIIRS and MODIS fire products complement each other, and both the VIIRS 375 m product and the MODIS fire product show good agreement in hotspot detection. VIIRS, however, provides better response for smaller fires and provides improved mapping of large fire perimeters. In addition, the VIIRS 375 m product shows a better response in nighttime observations, when fire activity normally subsides. While a VIIRS 750 m active fire product also is available, FIRMS opted to distribute the 375 m product due to its increased spatial resolution and the increased number of fires detected.

FIRMS data are an invaluable resource for managing ongoing fires and tracking their spread. As provided by NASA’s open data policy, all MODIS and VIIRS data and data products are fully and openly available. This policy also applies to the algorithms used to process the data along with the application program interfaces (APIs) that facilitate use of the data. This means that anyone, anywhere in the world who has access to a computer with an internet connection can access FIRMS, MODIS, and VIIRS data and receive emailed FIRMS Fire Alerts.

The European Forest Fire Information System (EFFIS) and the Forest Survey of India are just some of the worldwide government organizations and agencies using FIRMS, MODIS, and VIIRS fire and thermal anomaly data to help safeguard lives and property. In addition, the U.S. Climate Resilience Toolkit, a federal website that serves as a clearinghouse for climate-related information from across the U.S. government, recently added FIRMS data to their Tool Webpage.

The U.S. Forest Service uses FIRMS data as an integral component of its Active Fire Mapping Program, which provides near real-time detection and characterization of wildland fire conditions in a geospatial context for the continental United States, Alaska, Hawaii, and Canada. As noted by Brad Quayle, Program Lead for the Disturbance Assessment and Services Program at the Forest Service Geospatial Technology and Applications Center, the combination of FIRMS along with thermal anomaly data directly-downloaded from MODIS and VIIRS during a satellite observation (a process called “direct readout”) provides regional and national fire managers with a comprehensive view of the location, extent, and intensity of current wildfire activity throughout much of North America. In addition, the access to global active fire detection data and other relevant science products provided by FIRMS aids the Forest Service in assisting other countries with fire management and post-fire assessment mapping. “With FIRMS,” observes Quayle, “we never have to worry about gaps in data availability.”

Along with government agencies, numerous non-governmental organizations also have developed systems or websites that use FIRMS data. These include the Firecast system developed by Conservation International (CI) and three websites run by the World Resources Institute (WRI).

As noted by Karyn Tabor, CI’s Director of Early Warning Systems, FIRMS near real-time active fire data help land managers in the tropics monitor ecosystem threats, actively manage fires, strategize patrols of protected areas, and enforce land use policies. According to Tabor, FIRMS data are critical for alerting managers to fires in areas that are impossible to patrol on foot due to terrain or size. FIRMS active fire data also are valuable for protecting restored forest areas that are vulnerable to fires. In one example, the CI Firecast active fire web map showing FIRMS data was used by the World Wildlife Fund Madagascar as part of a community outreach campaign to highlight the importance of safeguarding reforested areas in the Amoron’i Onilahy Protected Area in southwest Madagascar, which was threatened by fires originating from nearby villages.

The World Resources Institute (WRI) uses FIRMS data on three of its most prominent data platforms: Global Forest Watch (GFW), Global Forest Watch Fires (GFW-F), and Resource Watch. Collectively, these three tools enable users to view, analyze, download, and subscribe to active fire alerts. GFW and GFW-F also provide analyses derived from FIRMS data, which are displayed in dashboards and fire reports. Alyssa Barrett, the GFW Platform Manager, notes that most WRI fire work is tied to monitoring the intentional burning of land for agriculture. According to Barrett, FIRMS data not only provide for rapid response to detected fires, they also help identify land being burned illegally and enable those responsible for illegal burning to be held accountable.

In an example of FIRMS data in action provided by Barrett, Sudamaris Bank in Paraguay had recently started using GFW to monitor land in their investment portfolio and received a fire alert for a potential fire on a client’s cattle farm. The bank notified the client, who was able to immediately begin fighting the wildfire. While the rancher lost 100 hectares of pasture, the rapid notification of the fire enabled him to save the rest of his 1,200-hectare property.

Thanks to data from Earth observing satellites, the world can respond.