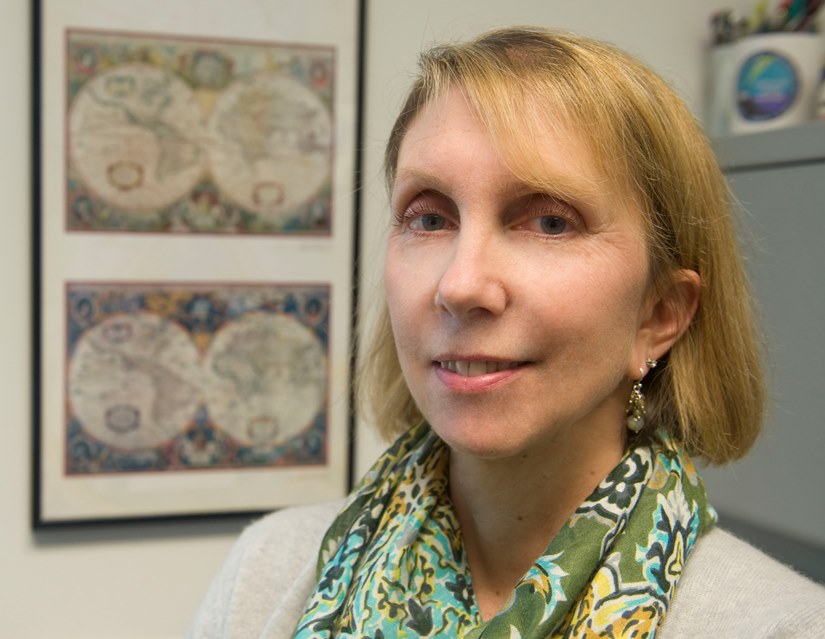 The walls of Carey Noll’s office at NASA’s Goddard Space Flight Center in Greenbelt, MD, are covered with maps. It’s obvious that she values the benefits of knowing one’s position on the planet, which is an important attribute for the manager of NASA’s Crustal Dynamics Data Information System (CDDIS). CDDIS is NASA’s home for space geodesy data, and one of the Earth Observing System Data and Information System (EOSDIS) Distributed Active Archive Centers (DAACs). While space geodesy may not be as well-known as other scientific disciplines, Noll observes that geodetic data are part of many NASA missions and have become an integral part of our lives.

How did you become involved in geodesy?

I got my start [at NASA] 35 years ago working on designing a data system called CDDIS for NASA’s Crustal Dynamics Project (CDP). CDP was designed to use space geodesy to prove that the Earth’s plates were moving. To do this, we calculated the change in position between geodetic stations on each side of a tectonic plate. We saw that the baseline between the two stations changed over time, which provided excellent support for plate tectonics.

CDDIS became a NASA DAAC in 2007. How does CDDIS compare with the other DAACs?

We’re a very small DAAC in terms of staff. We have two civil servants working here part time (myself and a deputy), and we have a contractor staff of eight people, but only parts of all these people. This includes parts of two system administrators.

But while our staff might be small, the amount of data we serve to our user community is huge compared with some of the other DAACs. Because our data are point data, the number of individual data products downloaded from CDDIS is definitely one of the higher numbers among the DAACs. Last year we served up over 1.2 billion files and 130 TB of data. So while we may be a small DAAC staff-wise, we distribute a lot of data!

Let’s talk about the science of geodesy. What are the goals of this science?

Basically, our goal is to determine the exact position of an instrument down on the ground to the centimeter or sub-centimeter level. If you do this over and over and over again, you end up developing something called a reference frame. This reference frame can be used to monitor positions over time and changes in position over time. So you end up with a position and a velocity, and this is what defines a terrestrial reference frame (TRF). Every few years, these data are re-analyzed to come up with a new, updated version of an international terrestrial reference frame. You can use the velocities calculated from this reference to determine where objects were—and where they might be—at a certain time.

How are these geodetic data collected?

How does CDDIS serve the geodetic community?

One thing we’re very proud of here at CDDIS is that this is NASA’s archive of space geodesy data, and it is the only archive within our community that deals with all four geodetic techniques. There are other organizations or agencies that will serve up GNSS or SLR or DORIS or VLBI data, but CDDIS is the only location in the world that serves up all four.

Not only do we archive the data from the four geodetic techniques, we also have the equipment to collect data using these four techniques here at Goddard. Three miles away we have the Goddard Geophysical and Astronomical Observatory (GGAO), which is operated by the Space Geodesy Project (SGP). We have SLR, VLBI, GNSS, and DORIS instruments at GGAO, and SGP is currently working to develop the next generation SLR and VLBI systems.

And how does geodesy support NASA missions?

We support a lot of NASA missions behind the scenes, and there are many missions that NASA is involved in that have space geodesy instruments on them because they need very precise orbits. International satellite missions like Sentinel-3, Jason, CryoSat, all have a laser retroreflector on them along with a DORIS beacon. Some of them have a GPS receiver on them. All of these techniques are used to create a precise orbit of the satellite. Once you know the satellite orbit, you can know the locations of your data on the Earth much better as well.

Have you faced any challenges as a woman in the geodetic community or managing a DAAC?

That’s an interesting question. Frankly, it’s not something I ever really think about. Since I’ve been in the geodetic community, in this user environment, I have been one of the very few women in this group. Growing up, so to speak, with CDDIS, I’ve developed good relationships with the scientists and the data providers. I have not experienced any challenges in my role as a DAAC manager and as a leader. I think I’m heard just as well as anyone else.

Where do you see space geodesy heading? What does the geodetic future look like?

Our community is developing better models of how the Earth works, such as better models to describe ocean loading or tides. How do you deal with motion due to an earthquake? This sort of thing. One reason why the TRF is recalculated every few years is because we develop better models for representing processes within the Earth.

Another activity we’re starting to get into here at CDDIS is providing real-time GNSS data. This is a challenge for us, but we now have real-time data transmission working.

One thing we would like to pursue is the relationship between geodesy and synthetic aperture radar (SAR), particularly in GNSS. I don’t have a good feel for this yet, but we would like to see if there is something we could do here to help the SAR community.

When I interviewed Alaska Satellite Facility Chief Scientist Franz Meyer, he mentioned that he sees SAR today as being where GPS was 10-20 years ago and changing from a science to an accepted part of society. Do you agree?

Oh yes. We’re already there with GPS. GPS receivers are everywhere, and you don’t even know it sometimes. The navigation system in your car is based on space geodesy. I mean, how many people know how to read a printed map anymore? This is a sad thing, because I think maps are wonderful! In another life I might have been a cartographer.