Geographic Information Systems (GIS) are used in nearly all fields that need to understand the spatial patterns and relationships between different types of data, from land-use planning to emergency response to resource management. GIS include many components:

Remote sensing data and imagery from Earth observations can be visualized within a GIS to provide more context about any area under study. The need is growing for NASA Earth science data to be in GIS-ready formats for easy integration and analysis in the primary tools employed by user communities. Numerous geospatial web services and tools are available through NASA's Earth Observing System Data and Information System (EOSDIS) Distributed Active Archive Centers (DAACs) to access GIS-ready data. This data pathfinder provides direct links to those web services and tools for accessing and using NASA Earth science data.

If you don't see a dataset you need or need to locate other types of data in GIS-ready formats, contact us.

Working with Multidimensional Data in a GIS

Working with Multidimensional Data in a GIS

GIS data contains spatial coordinates to represent where features are located. This is typically done using X and Y coordinates (or latitude and longitude). Multidimensional data can include additional dimensions such as depth and/or time. Multidimensional data and its associated metadata are stored in scientific data formats optimized for these data types. The most common specialized formats are Network Common Data Form (netCDF), Hierarchical Data Format (HDF), and Gridded Binary (GRIB). These scientific data formats share common structures for storing multiple variables, with each variable being a multidimensional array.

In recent years, GIS software has increased support for scientific data formats in their platforms. In addition to correctly ingesting and reading these files, primary software platforms have developed new tools to aid in common workflows, management, analysis and distribution of multidimensional data.

In tools such as QGIS and ArcGIS, support for raster data is provided using a mosaic dataset. A mosaic dataset is a data model that acts as a shell to input a collection of multiple raster files, which include different file types, and is viewed as a single image. A multidimensional mosaic dataset stores information about the dimensions and variables as fields in the mosaic dataset footprint table. The underlying raster data does not have to be connecting or overlapping but can be isolated or intermittent datasets. In some GIS software platforms, a single mosaic dataset can then be used to query, process, analyze, and serve data.

Working with Multidimensional Data in a GIS (ArcGIS Specific)

If you need assistance in working with multidimensional data in GIS-ready formats, contact us.

Using NASA Data in a GIS

Using NASA Data in a GIS

There are a variety of GIS programs available to users. The following examples show screenshots from QGIS, a free and open source GIS program, yet other programs have similar options for adding layers.

Adding a Raster Layer to a GIS

Adding a Vector Layer to a GIS

Adding a Web Service to a GIS

Some of the DAACs provide geospatial services, specifically web map services (WMS), web coverage services (WCS), and web feature services (WFS), providing access to a variety of GIS-ready datasets. Many of the URLs needed for data access are specific to the DAAC, and in some cases specific to the dataset. See Use Cases for Web Services to see examples for each service.

Use Cases for Web Services

Use Cases for Web Services

Storm surge from hurricanes pose threats to human health and wildlife. In areas where Superfund sites may be inundated, the concern that toxins will be dispersed is great. However, the level of concern varies widely depending on the specific contaminants and their concentrations. The Environmental Protection Agency (EPA), therefore, must assess where superfunds exist and the vulnerability of those sites, as well as risk to surrounding communities, when a large storm surge is expected. Use case adapted from CNBC news article and EPA Hurricane Harvey Report.

Concerned about the approaching hurricane expected to hit the panhandle of Florida, you want to look at Superfund sites in the area and the population density surrounding those areas to assess potential effects. Through SEDAC's WFS, you can directly access the data within a GIS.

In this example, the following SEDAC layers were added: 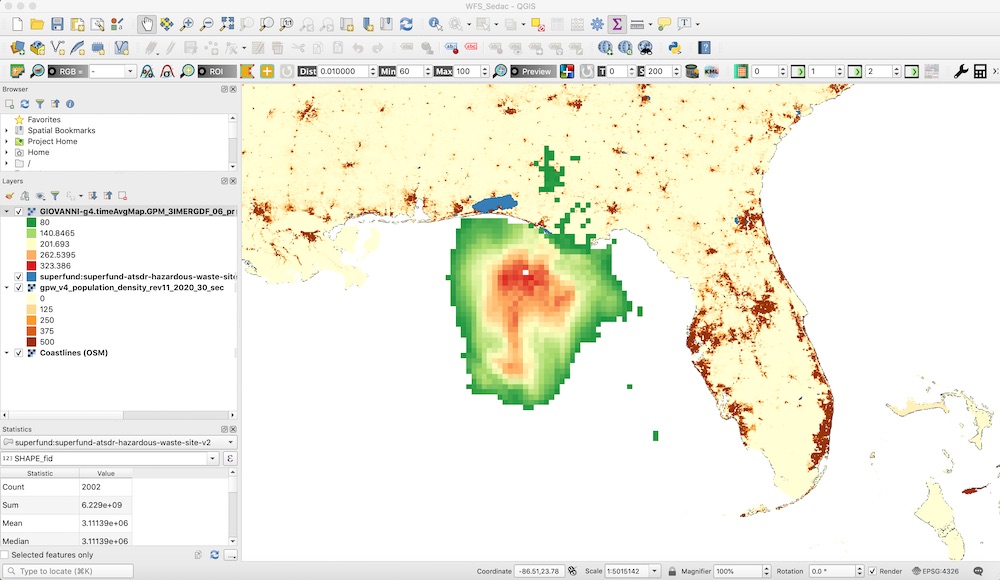 According to the Global Annual Temperature Rankings Outlook from NOAA, this year (2020) is on track to be one of the warmest on record.

Concerned about a changing climate, you want to access climatological data, and generate an anomaly map for the month of January, 2020. Through ORNL DAAC's WCS, you can directly access, within a GIS, Daymet data (a collection of gridded estimates of daily weather parameters generated by interpolation and extrapolation from daily meteorological observations) to run raster-based functions to generate a 28-year time averaged map and then an anomaly map for 2020.

In this example, the following ORNL DAAC layers were added: 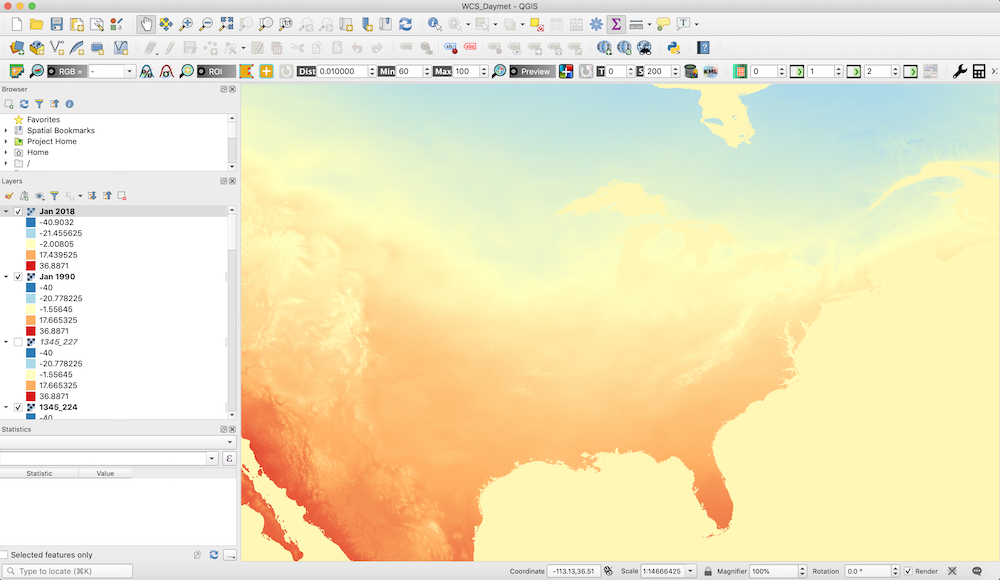 Approximately half the nation's original wetland habitats have been lost over the past 200 years. In part, this has been a result of natural evolutionary processes, but human activities, such as dredging wetlands for canals or draining and filling for agriculture, grazing, or development, share a large part of the responsibility for marsh habitat alteration and destruction. Louisiana's wetlands today represent about 40 percent of the wetlands of the continental United States, but about 80 percent of the losses (from Louisiana Coastal Wetlands: A Resource at Risk).

Concerned about a changing climate, you want to conduct an analysis of coastal wetlands loss from sea level rise using estimates of wetland losses as a basis for identifying potential adaptation measures. Through SEDAC's WCS, you can directly access, within a GIS, elevation data, population density, and an urban extents grid.

In this example, the following SEDAC layers were added: 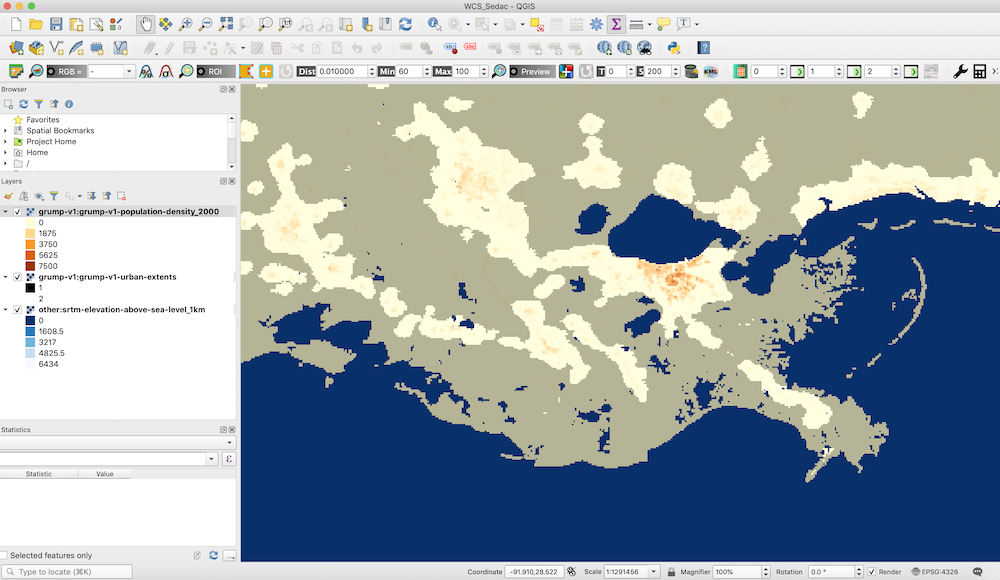 In a recent research article from the journal Global Ecology and Biogeography, titled The Global Fire-Productivity Relationship, it is noted that on a global scale, fire activity changes along the productivity/aridity gradient. This relation should be driven by differing relative roles of the main fire drivers (weather and fuel) along the productivity gradient. In moist regions around the globe, fire activity is believed to be driven by drought frequency, whereas in dry regions, fire is thought to be limited by the amount of fuel available.

Concerned about a changing climate, you want to test these ideas by comparing global fire activity. Within a GIS using GIBS's WMS, you can directly access MODIS land surface reflectance (bands 7-2-1, useful for distinguishing burn scars from naturally low vegetation or bare soil), fire and thermal anomalies, and normalized difference vegetation index, among many other relevant layers.

In this example, the following layers from GIBS were added: 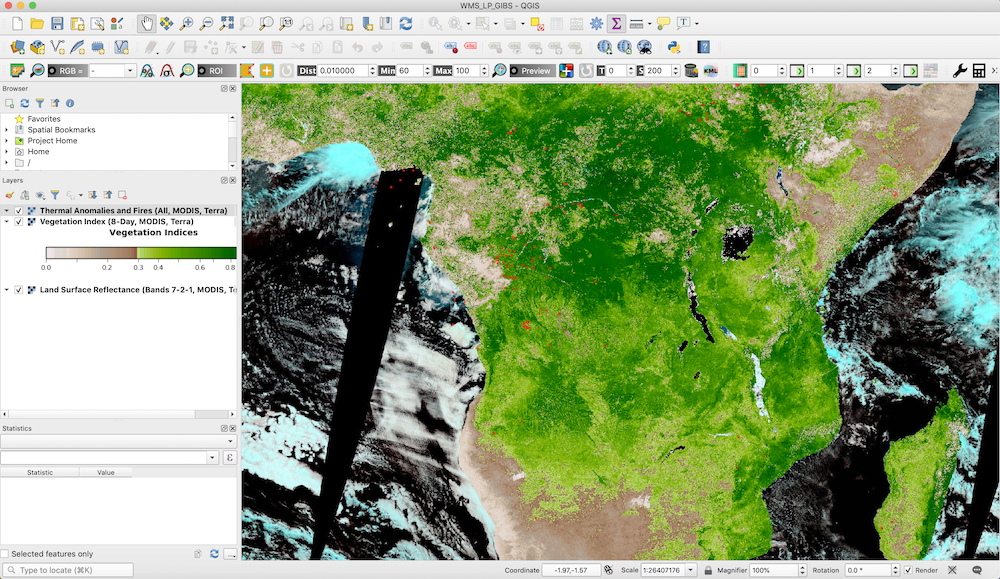 Many of the imagery visualization layers provided through GIBS are time-varying imagery layers and the date/time can be changed directly through some GIS applications using the temporal controller or time slider functionality. GIBS provides instructions for enabling this capability, with a fixed temporal range or an animated one, within several GIS applications.

NASA ArcGIS Online (AGOL) provides the capability to create and share NASA Earth science data with the public and interagency partners by bringing data to end users in an easy to use, cloud-based web platform.

NASA's Worldview visualization application provides the capability to interactively browse over 900 global, full-resolution satellite imagery layers and then download the underlying data. Many of the available imagery layers are updated within three hours of observation, essentially showing the entire Earth as it looks "right now." This supports time-critical application areas such as wildfire management, air quality measurements, and flood monitoring. Imagery in Worldview is provided by GIBS. Worldview now includes nine geostationary imagery layers from Geostationary Operational Environmental Satellite (GOES)-East, GOES-West and Himawari-8 available at ten-minute increments for the last 30 days. These layers include Red Visible, which can be used for analyzing daytime clouds, fog, insolation, and winds; Clean Infrared, which provides cloud top temperature and information about precipitation; and Air Mass RGB, which enables the visualization of the differentiation between air mass types (e.g., dry air, moist air, etc.). These full disk hemispheric views allow for almost real-time viewing of changes occurring around most of the world.

In the project area, for some datasets, you can customize your granule. You can reformat the data and output as HDF, NetCDF, ASCII, KML, or a GeoTIFF. You can also choose from a variety of projection options. Lastly, you can subset the data, obtaining only the bands that are needed.

Many of the DAACs also provide Interactive Tools for GIS Data from which data can be visualized, subsetted, and downloaded in different file formats that are GIS analysis-ready.

Dizzy the Disdrometer: An interactive story map from NASA's Global Hydrology Resource Center DAAC (GHRC DAAC) to learn about the disdrometer instrument, the Global Precipitation Monitoring (GPM) Ground Validation (GV) project, and where to find the data used during the field campaigns.

Hurricane Dorian (2019) in Sentinel-1 SAR Imagery: NASA's Alaska Satellite Facility DAAC (ASF DAAC) has created a timeline showing images captured by the Sentinel-1 satellites of Hurricane Dorian as it moved through the Caribbean and up the east coast of the U.S.

Ice-Albedo Feedback in the Arctic provides information on sea ice extent in the Arctic and the drivers of change. The story map also highlights the impact of increasing absorbed solar radiation and its impact within the ice-albedo feedback loop.

Introduction to MAIA and TEMPO introduces us to these two new missions, the Multi-Angle Imager for Aerosols (MAIA) and Tropospheric Emissions Monitoring Pollution (TEMPO), launching in 2022, that will study air quality and its impact on human health at unprecedented temporal and spatial scales.

Studying the 2019-2020 Australian Bushfires Using NASA Data guides users through the factors leading up to the 2019-2020 Australian bushfires disaster, the effect this event has had on air quality and global atmospheric composition, and the science behind researching the tie between disasters and public health. This story map uses data archived at ASDC.

The Disasters Applications area promotes the use of Earth observations to improve prediction of, preparation for, response to, and recovery from natural and technological disasters. Disaster applications and applied research on natural hazards support emergency preparedness leaders in developing mitigation approaches, such as early warning systems, and providing information and maps to disaster response and recovery teams.

My NASA Data is an effort to develop microsets of Earth science data that are accessible, interesting and useful to the K-12 and citizen scientist communities. My NASA Data provides a means of visualizing global datasets through its Earth System Data Explorer. My NASA Data provides global monthly visualizations of parameters, such as aerosol optical depth, surface air temperature, surface air temperature anomalies, wind speed, biome classification, chlorophyll, leaf area index, normalized difference vegetation index, concentration of CO2 in the troposphere, total column ozone, and air column concentration of CO, SO2, and NO2.

By choosing a dataset, the web-based tool provides information about the source of the data and the units, as well as a visualization of the monthly data (note that there are a few daily datasets). Within the Earth System Data Explorer, you can compare multiple datasets, create line plots, create animations, and perform computational requests (like computing the average values over time).

Once you have the dataset of interest, it can be exported to a variety of desktop applications, including Ferrett, GrADS, and MatLab. The data also can be saved as an ASCII, CSV, NetCDF, and arcGRID file. arcGRID and NetCDF files can be opened as a raster layer in GIS programs. CSV files can be opened as a "delimited text" file. To open properly, you will need to specify that it is comma-separated, the number of header lines to discard, and the appropriate fields for latitude and longitude.

My NASA Data also has a series of story maps designed for educational use: