NASA near real-time Earth observing data are vital to emergency response. Dave Jones enables these data to be used collaboratively in real time across platforms by emergency responders and managers. 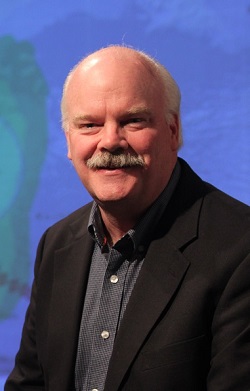 Research highlights: When disaster strikes due to a hurricane, earthquake, wildfire, flooding, or tornado, access to reliable data is a critical component of response and recovery. The most valuable data in these situations are those from trusted sources that provide responders with information in real-time and near real-time, and give them the ability to make rapid decisions as events unfold.

Along with the more than 10,000 standard data products in NASA’s Earth Observing System Data and Information System (EOSDIS) collection that are designed for scientific research, more than 200 near real-time data products are available through NASA’s Land, Atmosphere Near real-time Capability for EOS (LANCE) system. LANCE near real-time data are available generally three hours after a satellite observation (sometimes sooner) and are an integral resource for decision-makers needing rapid access to remotely-sensed Earth observing data.

Developing ways to integrate EOSDIS near real-time data with real-time, near real-time, and critical infrastructure data from other agencies and sources—and provide ways to rapidly evaluate the utility of these data during an emergency—is one focus of Dave Jones and his team at StormCenter Communications, a private company he founded and leads. As Jones observes, if subject matter experts can be placed on the same map and access the same data as decision-makers, whether on a mobile phone or a computer, this creates an environment where data can be shared collaboratively, understood in a timely manner, and acted upon to protect lives and property.

Providing the ability to collaboratively view and integrate NASA low-latency data products with data from other agencies and share this abundance of data and information through a common interface in real-time was the impetus behind Jones’ work developing a NASA-funded system called GeoCollaborate.

The development of GeoCollaborate was originally funded under NASA’s Small Business Innovation Research (SBIR) program. The highly-competitive SBIR program, along with NASA’s Small Business Technology Transfer (STTR) program, supports the research, development, and demonstration of innovative technologies that fulfill NASA needs and have significant potential for successful commercialization. GeoCollaborate is now an SBIR Phase III technology, which means it is ready for commercialization and can be sole-sourced by any government agency.

GeoCollaborate provides access to EOSDIS near real-time data along with data from multiple U.S. government agencies and even from other nations. These data are combined with Geographic Information System (GIS) web services and on-ground reporting. This enables subscribers to the service to lead data-sharing sessions, connect with followers in real-time, and share data from multiple providers on any platform or device using a common dashboard interface.

Jones notes that the system has facilitated the collaborative use of NASA data during the response to numerous disasters. For example, following Hurricanes Harvey in 2017 and Florence in 2018, hundreds of utility company ‘bucket trucks’ caravanned across many states to join in recovery efforts. This equipment had to muster in remote locations before being dispatched into unknown neighborhoods, often with little guidance if local roads were flooded, on their way to being flooded, or impassable due to storm debris. Near real-time imagery from the Moderate Resolution Imaging Spectroradiometer (MODIS) instrument aboard NASA’s Terra and Aqua Earth observing satellites were incorporated with USGS Landsat and stream gauge data, NOAA high resolution inundation modeling, and National Weather Service (NWS) radar to estimate when flooding would recede and utility trucks could safely enter impacted areas to restore power. In the aftermath of Hurricane Dorian in September 2019, NASA data were combined with data from the European Space Agency (ESA) to assess the extent of flooding in the Bahamas.

Along with near real-time data from MODIS and other sensors, Jones and his team recently incorporated population density information from NASA’s Socioeconomic Data and Applications Center (SEDAC) into the system. SEDAC is the EOSDIS Distributed Active Archive Center (DAAC) responsible for archiving and distributing NASA socioeconomic data, and serves as an “Information Gateway” between the socioeconomic and Earth science data and information domains. Using SEDAC’s Application Programming Interface (API), Jones and his design team configured GeoCollaborate to enable users to draw a polygon on a GeoCollaborate map that sends a real-time request to SEDAC’s database to display population information within the polygon. This population information is loaded immediately onto all other GeoCollaborate user dashboards or onto follower’s devices.

Of course, it’s not enough for emergency responders to have data for use during disaster recovery; responders also need the ability to quickly evaluate the utility of these data to ensure they are using best data for a given situation. This is where another component of Jones’ work comes in. As co-chair of the Earth Science Information Partners (ESIP) Disaster Lifecycle Cluster, Jones is helping to evolve a process through which datasets can be assigned ‘trust levels’ for use in decision making. This work is resulting in a new standard called Operational Readiness Levels (ORLs) for data that enable decision-makers to rapidly assess the quality of specific data products and their potential application during ongoing events.

ORLs range from 1 to 4. ORL 1 is the highest trust designation, and indicates data are available now for immediate situational awareness and decision making, among other criteria. ORL 4 is currently the lowest designation and indicates data that are “not likely to be immediately useful for operations, but are emerging datasets that should be ‘on the radar’.” ORLs also facilitate awareness of evolving research datasets moving toward operational use.

While NASA standard data products facilitate in-depth scientific research, NASA near real-time products and socioeconomic data are critical resources for tracking ongoing events and the number of residents that might be affected by these events. For Dave Jones, these data are integral components in his work developing new ways to provide public and private emergency managers and decision-makers with the information they need—at the right time and the right place—to make quick decisions for protecting lives and property using the best data available.

Read about the work: