Water is a finite resource, and the availability of freshwater can have major social impacts. Dr. Eric Sproles uses Earth observing data as part of his studies into water’s eco-social effects. 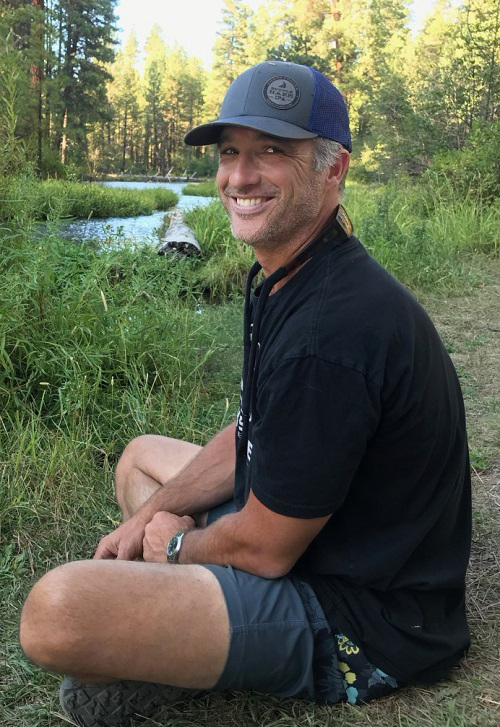 Research highlights: When Dr. Eric Sproles looks out his office window at Montana State University, he can watch as winter snow accumulates on the mountains surrounding Bozeman. Snow is good, for a deep snowpack in winter means spring runoff, and spring runoff means freshwater availability for the residents of the Gallatin Valley in which Bozeman sits.

But Bozeman is only a microcosm of not only the importance of water resources, but also of Dr. Sproles’ work. Through the use of remotely-sensed data, including data in NASA’s Earth Observing System Data and Information System (EOSDIS) collection, his research seeks to better understand the geospatial and climatic controls affecting global water resources and how changing water resources impact social-environmental systems. And as a finite resource, there is only so much water available on Earth.

According to figures available through the USGS, there are approximately 332,500,000 cubic miles of water on, in, and over Earth (to use a more common liquid measurement, one cubic mile is equivalent to approximately 1.1 trillion U.S. gallons, using the Milliliter.org conversion website). While this sounds like a lot, this number is somewhat deceptive. Of this massive amount of water, approximately 97.5 percent is saline water, mainly in the ocean. Only 2.5 percent of Earth’s water is the freshwater most terrestrial plant and animal life require. Still, this is 8,312,500 cubic miles of water. However, this number also is deceptive.

The vast majority of freshwater is locked up in glaciers and icecaps (approximately 5,710,687.5 cubic miles, or 68.7 percent of freshwater). When you look at readily available groundwater, surface water, or other freshwater (such as water vapor in the atmosphere), this is about 2,601,812.5 cubic miles of water. Complicating matters further, this global freshwater is not only unevenly distributed, but sources of freshwater such as lakes and rivers often cross geopolitical boundaries (this is easily seen in a NASA Worldview image of the Nile River winding through Egypt and Sudan). Incorporating remotely-sensed data (such as satellite imagery) into a Geographic Information System (GIS)-type analysis package not only makes it easier to assess the geopolitical aspects of water, it also helps enable the research by Dr. Sproles into the socio-environmental aspects of water resources.

Dr. Sproles and his colleagues used a combination of geospatial mapping applications, socioeconomic data, and data about changes in Earth’s mass acquired by the joint NASA/German Aerospace Center (DLR) Gravity Recovery and Climate Experiment (GRACE) mission to globally assess watersheds extending across geopolitical boundaries and identify regions with a higher probability of experiencing hydro-political tensions from the construction of dams, canals, and other water diversions. The GRACE mission (operational March 2002 to October 2017) used two identical satellites flying in tandem to acquire extremely precise measurements of Earth's gravity field and mass re-distributions. Since water has mass, GRACE data can be turned into products that provide an excellent picture of changes in water resources as shown through changes in Earth's mass at specific locations. The GRACE data record continues with the GRACE-Follow On (GRACE-FO) mission that launched in May 2018 and is a joint NASA/German Research Centre for Geosciences (GFZ) mission.

The research team looked not only at ongoing development of new dams and water diversions, but also at existing arrangements governing transboundary river basins, such as treaties and formal agreements. The team notes several factors that can exacerbate hydropolitical tensions, including changes in terrestrial water storage (which can be assessed using GRACE data, see image at right), projected changes in water variability, per capita gross national income, domestic and international armed conflicts, and historical instances of disputes over specific transboundary waters. Dr. Sproles and his colleagues note that this study “points to the vulnerability of several basins in Southeast Asia, South Asia, Central America, the northern part of the South American continent, the southern Balkans as well as in different parts of Africa where new water infrastructure is being built or planned, but formal transboundary arrangements are absent.” The research team further observes that additional political, environmental, and socio-economic factors in some of these regions could further heighten hydropolitical tensions.

Closer to home, Dr. Sproles is leading several ongoing projects in his role as director of the newly-created Geospatial Analysis of Snow and Water Resources Lab (GEOSWRL) at Montana State University. One EOSDIS resource used by Dr. Sproles and his GEOSWRL team are data from NASA's National Snow and Ice Data Center Distributed Active Archive Center (NSIDC DAAC). NSIDC DAAC archives and distributes EOSDIS data related to snow and ice processes, particularly interactions among snow, ice, atmosphere, and ocean. Located in Boulder, CO, NSIDC DAAC is part of the Cooperative Institute for Research in Environmental Sciences (CIRES), which is a joint institute of the University of Colorado Boulder and NOAA. Dr. Sproles and his GEOSWRL team currently are involved in several snow and ice-related projects.

In one USGS-supported project, GEOSWRL researchers are measuring the spatial variability of albedo across the winter landscape. Albedo is a measure of the proportion of light reflected by a surface. Fresh, bright white snow has a high albedo and reflects almost all light striking it; older, darker snow and open ground reflect far less light and have a lower albedo. Light that is not reflected is absorbed by an object, which leads to an increase in the temperature of the object. Previous research shows that a reduction in albedo, whether through the aging of snow causing it to become darker or through the melting of snow that exposes bare ground, also leads to a localized increase in temperature of these darker areas. This, in turn, contributes to a further reduction in snow cover.

Snow cover data products created from data collected by the Moderate Resolution Imaging Spectroradiometer (MODIS) instrument aboard NASA’s Terra and Aqua Earth observing satellites are available through NSIDC DAAC. Along with snow cover and snow extent, these products also include two albedo products (Terra MODIS: MOD10A1, doi:10.5067/MODIS/MOD10A1.006; Aqua MODIS: MYD10A1, doi:10.5067/MODIS/MYD10A1.006). Since the ground-based data being collected by the GEOSWRL team are of a higher resolution than the satellite-acquired data from MODIS or from similar instruments aboard the joint NASA/USGS Landsat series of satellites, they will be used to develop methods and technologies to improve the calibration and validation of satellite-borne snow and albedo-sensing instruments.

Another USGS-supported GEOSWRL project is exploring how weather patterns affect snow loading in steep, complex mountain terrain in Montana. This research has direct applications for not only water resource managers, but also for avalanche professionals in the state and beyond. Along with satellite-collected snow cover data, the team is using UAVs to remotely-collect data in mountainous areas that are difficult, if not impossible, to access.

Finally, in Montana’s grasslands, the GEOSWRL team is using neural networks to identify and map river ice in the Yellowstone River using NASA and European Space Agency data as part of a National Weather Service-supported project. Spring flooding triggered by ice jams on the Yellowstone River damages valuable rangeland in rural communities, destroys bridges and other infrastructure, and severely impacts riparian ecosystems. As Dr. Sproles points out, river ice dynamics on continental rivers like the Yellowstone are not well understood or quantified. He notes that preliminary results from this project and other ongoing GEOSWRL projects shortly will be available through a GEOSWRL website that is under construction.

As winter slowly transitions to spring in the Gallatin Valley, mountain snow is beginning to melt and river ice is starting to break up. Freshwater from these processes will slowly make its way from the mountains and into the valley, sustaining the region for another season. The resulting green-up will be observed not only by residents, but also by instruments aboard Earth observing satellites. The ability to track snow, water, and other hydrologic resources using satellites gives researchers like Dr. Sproles the ability to extend their understanding of this vital resource—and it’s social and political impacts—far beyond the confines of the Gallatin Valley.