Who Uses NASA Earth Science Data? Kelly Gleason, to study interactions of ecosystem disturbance and mountain hydroclimatology along with the associated implications for water resource availability in a changing climate. 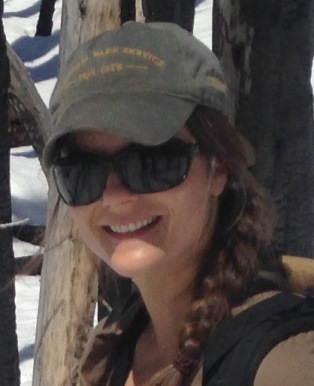 Research interests: Interactions of ecosystem disturbance and mountain hydroclimatology along with the associated implications for water resource availability in a changing climate.

Current research/work focus: For the past four years, Gleason has studied forest fire disturbance on snowpack energy balance and snowpack ablation in a recently burned forest in Oregon’s Cascade Mountains. Her research seeks to shed new light on the effects forest fires have on snow hydrology. “I hope to improve our overall understanding of ecosystem disturbance and snowpack hydrology interactions,” Gleason says. “This will provide useful tools to resource managers to better predict not only interactions of ecosystem disturbance, but also climate change effects to water resources in forested snow-dominated regions.”

From observational research, Gleason determined that in the winters following forest fires the more open canopy allowed 60% more sunlight to reach the snowpack surface, while the sloughing of charred debris from standing dead trees darkened the snowpack surface and reduced the snow albedo by 40%. These two factors led to a 200% increase in the amount of sunlight absorbed by the snowpack surface, which resulted in faster snowmelt in the burned forest. As a consequence, snow disappearance occurred three weeks earlier in burned areas than in the adjacent unburned forest.