The Amazon River travels through 6,280 kilometers of rainforest, crossing Peruvian highlands and Brazilian rainforests. Draining approximately 40 percent of the South American continent, the river discharges over 1.5 trillion liters of water daily into the Atlantic Ocean. Throughout its journey, seasonal changes affect its immediate environment and the surrounding land processes. From November to June, rain drenches areas of the Amazon jungle, dropping as much as three meters of water. Much of this deluge runs into the river, and some sections swell to nearly 480 kilometers across, submersing parts of the surrounding forest for up to six months.

Examining a large river system like the Amazon is critical to understanding the water cycle. River flow is part of a much larger natural balance in which many other elements interact, including landscape processes, sediment transport, carbon and nutrient cycling, and species ecology. Understanding the impact of river hydrology helps researchers assess the status of an entire basin. However, few scientific tools are available for monitoring river water cycles. 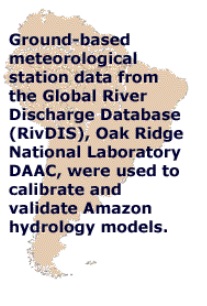 In large floodplain-dominated rivers such as the Amazon, variations in water heights create a signal that is detectable by 37 GHz passive microwave radiometers. From these signals, Vorosmarty was able to piece together a picture of river discharge, pixel by pixel, including input from tributaries and periodic differences in water height due to seasonal variations.

When it came time for ground-truth, Vorosmarty and colleagues found that the satellite imagery and hydrology models agreed. Both data sources reflected the progressive increase in discharge and magnitude, as well as the influence of tributary inflow. Measurements of seasonal high and low water levels also matched. Both also showed interannual variations in discharge caused by the 1982/1983 El Niño event.

Looking to the future of Amazon River research, NASA is scheduled to participate in an international study called Large-Scale Biosphere-Experiment in Amazonia (LBA). Ecology and Hydrology projects sponsored by NASA are designed to support automated data collection along the Amazon from late 1998 to 2003. An important element of LBA is the combination of remote sensing, ground-based measurements, and process modeling. Resulting data from the NASA projects will be archived at ORNL DAAC. Although Amazon data collection continues, funding cuts threaten ground-based river monitoring in many other parts of the world. Consequently, the ability to monitor rivers by satellite will become increasingly valuable and important for scientists attempting to understand river hydrology cycles.